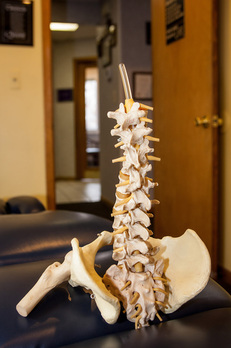 Chiropractors specialize in the neuromuscular system, (nerves, muscles, and bones), detecting and correcting misalignments of the spine (known as vertebral subluxations). Subluxations adversely affect the nervous system and can severely affect your health.

Many chiropractic techniques involve the use of the hands, gently restoring the vertebrae to their proper alignment and motion. Instruments also may also be used which does not require any turning of your neck or spine. This is a nice technique if someone does not like the small release sound that sometimes happens. When your spine is free of subluxations, you are free to heal, and become more than you are today.

Chiropractic is a lifestyle that more and more people are choosing. Many parents are discovering that their children are healthier and happier when they receive regular chiropractic care.

The following are the three fundamental principles of chiropractic.

The History of Chiropractic

The roots of chiropractic care can be traced all the way back to the beginning of recorded time. Writings from China and Greece written in 2700 B.C. and 1500 B.C. mention spinal manipulation and the maneuvering of the lower extremities to ease low back pain. Hippocrates, the Greek physician known as the father of medicine, who lived from 460 to 357 B.C., also published texts detailing the importance of chiropractic care. In one of his writings he declares, "Get knowledge of the spine, for this is the requisite for many diseases".

In the United States, the practice of spinal manipulation began gaining momentum in the late nineteenth century. In 1895, Daniel David Palmer founded the Chiropractic profession in Davenport, Iowa. Palmer was well read in medical journals of his time and had great knowledge of the developments that were occurring throughout the world regarding anatomy and physiology. In 1897, Daniel David Palmer went on to begin the Palmer School of Chiropractic, which has continued to be one of the most prominent chiropractic colleges in the nation.

Doctors of chiropractic have become pioneers in the field of non-invasive care promoting science-based approaches to a variety of ailments. A continuing dedication to chiropractic research could lead to even more discoveries in preventing and combating maladies in future years.